Yo! Thanks for visiting my wiki!

I'm grateful you're taking your time to deepen your knowledge about this skillfully crafted page I made. You might or might not want to enhance this unforgettable experience by clicking the audio located at your right. Amazing, I know.

I'm a horror manga and movie nerd extraordinaire, as well as everything your parents warned you to stay away from. I bribed the gods to let you stay. Consider this: if you're reading this it probably means you're my friend and I trust you. I'm secretly your biggest fan. Shh.

I have no viable excuse for this wiki. It's simply an archive in encyclopedia format for me to work on my characters, their stories as well as the multiverse they live in. Yes, a multiverse, because all the stories are connected and serve as sequels to each other. Hell, some characters even appear in more than one story and others are recurring figures around here.

I named it DethVerse as a rather obvious play on the word multiverse, and also because it's an universe that is intended to die. You'll have to find out why by reading the articles, though. It may sound a bit lame but, oh well, at least you gotta admit my wordmark is pretty rad, huh? I mean, look at that bird. Red bird skull being dead 'n all. Oh, yeah that's right, it feels kinda late to mention it at this point, but pretty much every pixel you're seeing here was drawn by me from scratch, on MSPaint, with a mouse.

I'm a little obsessed with musical (metal/rock, rap/hip-hop and electronic), mythological and cultural/racial references, as well as shoutouts to anime, manga and gaming, so expect a lot of that. A lot. I indulge in assigning theme songs and voice actors to my characters (I think I'm more into seiyuus than English VAs, but I love talking about both), so embrace youself for that too. I'm also all for buff ladies and red-clad protagonists.

My inspirations draw from H.P. Lovecraft's eldritch lore, my favorite works and stuff I find cool but that I like to ponder whether it would actually happen, besides the foundations behind it. I try to make the character designs and even personalities in general goth and camp, while the stories themselves are superficially fun and lighthearted, but hide a journey of no return into a more dark, depressing and serious tone.

Anyway, in case you found the main page confusing and have no idea where to start, I'd advice you to begin with the stories page, followed by the category page for characters divided by stories in which they appear or the MCs page. The buttons under the header for internal links could also be useful, as well as the Wiki Navigation tabs.

My blog exists to keep my goals tangible and I believe even unregistered users can edit others' talk page, I'm not sure. It is completely possible, however, to comment on articles at the bottom of every page and start discussions there. I'd recommend the AdBlock app in your life.

All around (bullet point version) 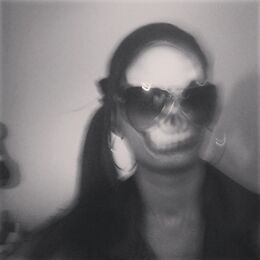 What you will find here

Do not proceed further if you...

Keeping a wiki requires effort, hard work, free time, inspiration and lots of tissue to wipe your tears. The following are several pages, categories, projects and layouts I plan on editing, creating, expanding and formatting for whatever reasons, just so I don't forget my priorities. I call them my divine tasks.

Retrieved from "https://elliesocs.fandom.com/wiki/User:EleighVoight?oldid=10560"
Community content is available under CC-BY-SA unless otherwise noted.

Ranked #1
on this wiki